Origins of the Afro Comb 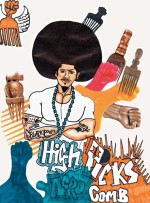 The Fitzwilliam Museum, University of Cambridge has developed an extensive research engagement programme across 23 prisons working with 4000 prisoners, 300 members of staff, and delivering 400 sessions in the four years to 2013. The project began by focusing on the Museum’s ancient Egyptian and Sudanese collections and now delivers new research in the fields of Egyptology, archaeology, anthropology and criminology as a means of enabling men of African, Black British and Caribbean descent to engage with their history and cultural heritage. From this work, a research project developed in collaboration with prison groups and community members culminated in a major exhibition and public programme The Origins of the Afro Comb in the summer of 2013.

The Oriental Museum at Durham University is home to a volunteer-run Chinese School. Every Sunday the group uses classrooms in the teaching space adjacent to the museum free of charge and are encouraged to use the museum socially and for teaching. The Museum’s Chinese collection is by far its largest and most significant, so this relationship is of mutual benefit, and has helped staff to get to know members of the Chinese community. The head teacher of the school has recognised the impact this relationship has had on enhancing the students’ cultural and linguistic education, as well as enriching the lives of adult members of Durham Chinese School.

The loan of the 2,500-year-old Lindow Man, Britain’s best-preserved bog body, by the British Museum resulted in an award-winning temporary exhibition, Lindow Man: a Bog Body Mystery at the Manchester Museum. Staff had been working on the ethical treatment of human remains in museums; the exhibition attempted to raise the issue for public debate. Following a public consultation, staff decided to interpret the body from a number of perspectives, in order to show what the remains meant to different people. The exhibition and accompanying programme of events received a wide range of responses regarding human remains in museums, their display and retention.